There are countless forecasts and predictions of when we may expect to see a return to “Pre-COVID” or 2019 levels of traffic in aviation. While it’s important to have a vague idea, right now with all the ever-changing “virus variables” I believe the question of when we reach 2019 levels becomes a lot less relevant than how we recover. How will our industry look? I believe a macro look at our industry over the last 10 years offers a strong indicator of how airlines may emerge.

The aftermath of the financial crisis was arguably felt well into the early 10s. Despite this, the European airline industry as a whole managed to grow every year since 2010, apart from one. The growth wasn’t victimless, with many established airlines becoming the casualties of takeovers, mergers or bankruptcy proceedings. None the less, by 2015 the market was on track to what seemed like a healthy, financially sustainable growth.

We see that the mid 10s provided a leap in profitability. The main driver behind this was the fuel price collapse in 2015. However, other contributing factors were the bankruptcies and mergers in the years before, leading to network rationalisation across the continent, furthermore the more in-depth growing strategic and commercial cooperation on the lucrative North Atlantic routes provided an additional margin on top.

RASK remained relatively safe and steady at an industry level, with the a portion of the drop in costs visibly being passed on to customers in 2015 and onwards. Production cost declined, mainly driven by fuel price, however since 2017 it had started to slowly creep up again. This highlights the crucial need to have a very manageable and sustainable cost base, as the creep up in costs came at a time when in Europe, the average size of intra-Europe flights grew by 20% from 125 in 2010 to 150 in 2019.

From the top-down picture drawn above the question many ask is what went wrong at the airlines, that didn’t make it to 2020. I picked out a few case studies, which should serve as examples to avoid for executives preparing for the COVID-19 survival battle and their emergence into the new world.

The one thing they all have in common is the lack of a crystal clear, defined strategy. While their individual woes are all slightly different, much like all roads lead to Rome, all their woes can be traced back to the lack of a clear strategy. All of the above listed airlines were in two minds, whether that is their network strategy, product strategy, customer approach, marketing strategy, etc. I drafted the below quadrant to illustrate the issue. 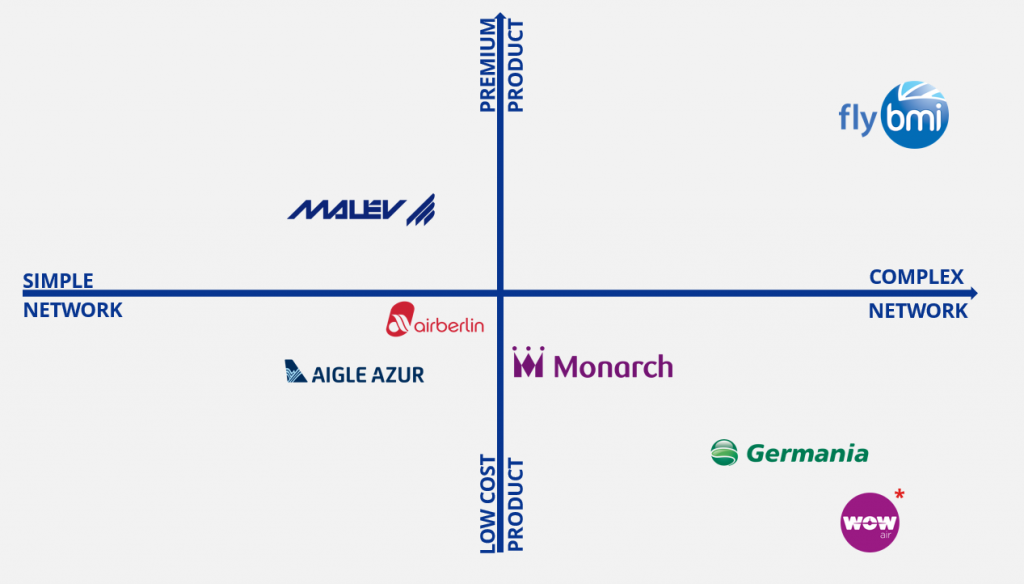 The X axis serves as an illustrator of network complexity. This refers to how complex an operation the commercial strategy of the airline requires. The arising degree of complexity can lead to significant financial challenges, unless the yields achieved by such complexity warrant the operational implementation of the network.

The likes of Air Berlin who dabbled in long-haul and short-haul with a large fleet actually had a relatively simple network. On the other hand, FlyBMI with a fleet of circa 15 ERJs had a much more complex network due to having to base aircraft at outstations in order to feed Star Alliance HUBs. I won’t pretend to know much about Fly BMIs operating and fixed costs, but the economics of basing one or two aircraft in foreign outstations must increase the overheads substantially. This would make it a complex network.

Before I receive too much backlash over WOW’s network placement, this is due its severely capacity constrained home and HUB airport. WOW’s on-time performance was hit massively by it, which translated to a EU261 (Delay compensation) fee of over 10 Euros per passenger in 2017. By the time of its bankruptcy it owed passengers around 100 million euros in EU261 alone.

The Y axis is the product provisioning for customers. There is a key difference between who an airline caters for and who actually flies with them. In our industry an alarming number of airlines don’t understand in their customer base, which makes product tailoring a very challenging, perhaps pointless exercise. Malev is a superb example of an airline, which had an excellent customer proposition, however it had a home market, which just wasn’t prepared to pay the price for it, resulting in death struggle for years before its eventual demise.

Many people predicted in the mid 2000s the unstoppable growth of LCCs, and their eventual market dominance. Multiple studies have since shown in-depth how a new LCC entrant in a market steals some traffic from incumbent carriers, but it grows the overall market by stimulating demand with its lower fare buckets. However, if we apply traditional supply and demand or QSI values from 10-15 years ago to these markets, LCC’s market share should be considerably larger. So what has changed?

Legacy carriers adapted to the new challenge by tailoring their products somewhat, but the key to their successful survival and growth has been the tailoring of their services. Unfortunately knowing from experience, there is little to no difference between an economy seat on a British Airways and a Ryanair economy seat. 10-15 years ago there would have been somewhat of a difference between the seats, but more importantly there would have been a huge difference with what you get for your fare. With Ryanair you got the seat if you are lucky, while with British Airways you have X check-in bags, a meal, newspaper(s), and pampering. Today you get the exact same services but having to pay individually on top of a basic fare, or having to pay a larger price for the bundle.

However as LCCs caught up to the benefits of product segmentation, offering a more “premium bundle” for the higher yield passengers, but at a discount compared to the established network carriers. These converging business models started leading to the eventual overall “hybridisation” of the industry. While hybridisation was seen as something to avoid 10 years ago, today it seems that with a simplified production platform a hybrid offering of products and services for traditional LCCs and network carriers seems to be the key for a sustainable operation.

So how can an airline prepare for the new world? Does a map like Toscanelli’s for Colombus exist for aviation post Covid? (Let’s hope not, because it was missing a huge land mass…)

On a more serious note, anybody who says they know what our industry will look like is either lying or they wouldn’t tell anybody else anyway. Sadly for everyone, a debt burdened aviation infrastructure post COVID is going to be a more expensive outing. It will also be a distorted market for years as a result of the uncoordinated rescue packages, going to varying lengths at aiding airlines’ survival and eventual recovery.

The number one priority will be understanding how business passengers will return and what portion of pre COVID business customers will return. Slow business passenger recovery will pose a particular challenge as airline strategies may have to change substantially from revenue management to cabin layouts in order to negate lost revenue. The ramification of this could trigger a supply-chain reaction affecting almost the entire aviation supply chain.

What can individual airlines do to reassure passengers of their safety onboard their aircraft? Both perceived and actual processes and practice being implemented throughout the whole customer journey, all while providing as seamless an experience as possible.

While there are cases when you can have too much liquidity, in a posts COVID world at least short-term that certainly isn’t the case. Poor liquidity and financial reserves can attract the worst publicity, which in turn damages forward bookings and leads to a vicious catch 22. Furthermore, liquidity will play a key role for the eventual come back of demand and the more liquidity airlines will have the more dynamic they can be in restarting their operation and making sure any first mover advantage can be maximised.

If not already done so, now is prime time to remove all network complexity that creates no added value. The definition of added value also needs careful consideration. Is it still justifiable to keep a couple of routes as long as they cover variable costs and keep aircraft flying?

Once the network has been right sized, evaluate what needs to stay, what needs to go. In terms of legacy issues surrounding fleet (similarly to many other legacy issues…) this probably is prime time to reduce complexity and create a platform for survival that’s nimble enough to support fast paced growth into the “new world” if required.

Emerging from COVID-19 demand profile in all aspects is likely going to be significantly different before it normalises – and it may take some time for it to normalise. Therefore, unless highly specialised, you need to think of a way to ensure your operating platform can capture as much of the demand out there as there is – both route by route and system wide. Beggars can’t be choosers, is it time to reimagine how you position your airline? Is it time we look at airlines as utilities rather than commercial brand? Could it be a white label operation, where the customer brands their own operation by choosing their own product…?

Only time will tell how drastic a change is required – if any – however customer centricity will play a vital role in airlines’ COVID recovery plans.

Once you have a crystal clear, yet dynamic strategy on getting through COVID you may concentrate on what moves you may make in the market. How is the appetite for consolidation evolving in your key markets? Do you have sufficient liquidity and stability to leapfrog the COVID recovery with inorganic growth?

COVID-19 has had an enormous impact on consumer habits both directly and indirectly through government restrictions. The impacts will be felt for years to come and the sooner we manage to learn to live with both the virus and its economic impacts, the more successful we will have dealt with this pandemic.

We use cookies on our website to give you the most relevant experience by remembering your preferences and repeat visits. By clicking “Accept All”, you consent to the use of ALL the cookies. However, you may visit "Cookie Settings" to provide a controlled consent.
Cookie SettingsAccept All
Manage consent

This website uses cookies to improve your experience while you navigate through the website. Out of these, the cookies that are categorized as necessary are stored on your browser as they are essential for the working of basic functionalities of the website. We also use third-party cookies that help us analyze and understand how you use this website. These cookies will be stored in your browser only with your consent. You also have the option to opt-out of these cookies. But opting out of some of these cookies may affect your browsing experience.
Necessary Always Enabled
Necessary cookies are absolutely essential for the website to function properly. This category only includes cookies that ensures basic functionalities and security features of the website. These cookies do not store any personal information.
Non-necessary
Any cookies that may not be particularly necessary for the website to function and is used specifically to collect user personal data via analytics, ads, other embedded contents are termed as non-necessary cookies. It is mandatory to procure user consent prior to running these cookies on your website.
SAVE & ACCEPT